You are here: Home / Bee Education

Many people have been asking what equipment is needed when you are looking into getting a hive. First it is important to explain what you are getting. A package is typically 3 lbs of bees and a queen. Our nucs that we sell are 5 frames of the Langstroth design. They are what we consider deep frames (9 1/8 “). There will be a laying queen, 4 frames of brood, and 1 frames of honey. So onto the equipment that you need as a beginner in beekeeping! 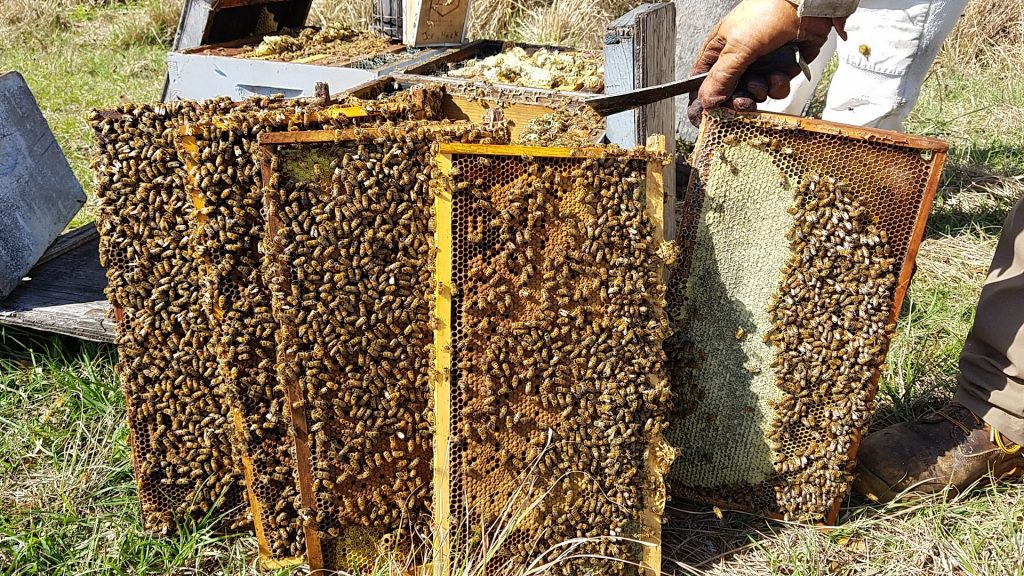 Our nucs have 5 deep frames like the example pictured above, (4 frames of brood and 1 frame of honey).

END_OF_DOCUMENT_TOKEN_TO_BE_REPLACED

The Playbook for Poisoning the Earth

IN SEPTEMBER 2009, over 3,000 bee enthusiasts from around the world descended on the city of Montpellier in southern France for Apimondia — a festive beekeeper conference filled with scientific lectures, hobbyist demonstrations, and commercial beekeepers hawking honey. But that year, a cloud loomed over the event: bee colonies across the globe were collapsing, and billions of bees were dying.

Bee declines have been observed throughout recorded history, but the sudden, persistent and abnormally high annual hive losses had gotten so bad that the U.S. Department of Agriculture had commissioned two of the world’s most well-known entomologists — Dennis vanEngelsdorp, a chief apiary inspector in Pennsylvania, then studying at Penn State University, and Jeffrey Pettis, then working as a government scientist — to study the mysterious decline. They posited that there must be an underlying factor weakening bees’ immune systems.

END_OF_DOCUMENT_TOKEN_TO_BE_REPLACED

Busy as a bee: Pollinators put food on the table

Pollinators—including birds, bats, and bees—pollinate fruits, vegetables, and other crops that provide us with food, fiber, drugs, and fuel. In addition to pollinating food crops like apples, almonds, and pumpkins, bees pollinate forage crops including alfalfa and clover that provide feed for cattle and other animals.

And, it isn’t just honeybees that help put food on the table. North America’s approximately 4,000 wild bee species help pollinate agricultural crops as well as the seeds, nuts, and fruits that are consumed by animals from songbirds to grizzly bears.

END_OF_DOCUMENT_TOKEN_TO_BE_REPLACED

Did you know there are three types of honey bees and each one has a specific job to do in the colony?

The nucs will contain a new 2021 queen and 5 deep frames. They are $165.00 each. They are NOT overwintered. Preorders are available now and you can order them on our website under products. For further questions , please email hackenberghoney@gmail.com or call/text Davey at 570-850-7492.